Prescription medication, when used by the person it is prescribed for and used as directed, is not considered “misuse.”  When we’re talking about prescription drug misuse by teens, we mean taking medication that was not prescribed for you by a doctor, or using it in a manner that is not what is indicated on the label.

On its face, it might not seem like a big deal, but when you consider that the first teen in this example is misusing a powerful amphetamine, and the second teen is misusing highly-addictive opioids, you’ll see there is cause for alarm.  Most adolescents’ brains are not fully developed until their mid-20s, leaving them more vulnerable to addiction than adults.

Two-thirds of teens and young adults who report misuse of prescription medicine are buying or given it from friends, family, and acquaintances.  The most commonly misused prescription drugs by teens are opioids, stimulants, and central nervous system (CNS) depressants.

Used to relieve pain, such as Vicodin, OxyContin, or codeine.

Used to relieve anxiety or help a person sleep, such as Valium or Xanax.

What are the Risks to Youth?

Opioids:  Prescription opioids are strong drugs with a high risk for addiction. Taking them in high doses, and/or in combination with other substances like alcohol, can result in life-threatening slowed breathing, overdose, and death.
Stimulants:  Stimulants are known to be used by youth as a “study drug,” and can be addictive when people start to use them compulsively. Stimulants cause increases in blood pressure, heart rate, and breathing.  This can cause rapid or irregular heartbeat, delirium, panic, psychosis, paranoia, heart failure, or even fatal seizures. There is also the potential for cardiovascular failure (heart attack) or deadly seizures.
CNS Depressants:  Like opioids and stimulants, CNS depressants can be addictive. Taking higher doses of a depressant can cause impaired memory, judgment and coordination.  It can also have side effects like paranoia and thoughts of suicide. Using prescription depressants (sedatives and tranquilizers)  in high amounts or with other substances like alcohol can lead to overdose and death.

What Can Parents Do?

In order to protect your child from prescription drug misuse, we encourage parents to CARE, CONNECT, COMMUNICATE and pay CAREFUL ATTENTION.  While this strategy is no guarantee, if implemented consistently and with intention, the likelihood of your child engaging in any substance use is much lower.

Educate yourself and others about the harmful effects of misusing prescription medicine and make it a priority to protect your child from engaging in any substance use.  Start early and let your child know you care about their health and safety. These can be tricky conversations and difficult situations to navigate with your kids, but a little work on the front end can protect your child’s health and safety for years to come.

Connection is key to prevention.  Kids that have stable, consistent, and healthy relationships with adults are more likely to make safer decisions and live healthier lives.  It’s important that parents, and other caring adults, take time to listen, pay attention, spend time, and follow up with the kids in their lives. When kids feel valued, they better understand their feelings and are more willing to listen to you. 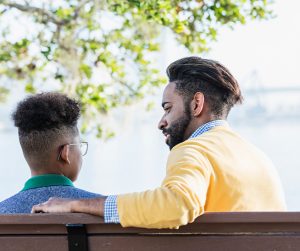 Consistent and clear communication with your child is important.  While your child might reasonably know that alcohol, marijuana, and nicotine are a no-go with you, prescription medication isn’t always so clear.  Many youth believe that manufactured medicine prescribed by doctors couldn’t be dangerous or harmful.  As a parent, make prescription drug misuse part of the “no drugs or alcohol” talks you have with your child throughout their life.  Parents do make a difference: Youth who continue to learn about the risks of drugs at home are up to 50% less likely to use drugs than those who are not taught about the dangers.

Make it clear to your child that you don’t approve of them misusing prescription drugs, but be curious and open-minded about their experiences.  It’s easier to start a conversation by asking what they think about it or if they’ve seen other kids doing it than to immediately interrogate them about if they’ve ever misused a prescription. It’s more important – and effective– to listen and discuss rather than to lecture.

As a general rule, know where your kids are at, who they are with, and be sure to check in when they get home.  Be on alert for changes in behaviors, friend groups, or attitudes.

Worried your child may be misusing prescription drugs?

The Partnership to End Addiction can help.