Vaping is the act of inhaling and exhaling an aerosol, often referred to as vapor, produced by a vape or e-cigarette.  Vapes and e-cigarettes are the same thing, though youth tend to use the term “vapes” instead of “e-cigarettes.”  Vaping has become more popular among teens than regular cigarettes, especially given that vaping devices can be used for anything from highly-concentrated nicotine flavors like mango, blueberry, or tutti frutti, to potent concentrates of THC (the chemical compound in marijuana that produces the high).  The most current U.S. data vaping available (from the Monitoring the Future 2020 Survey Results) revealed that: 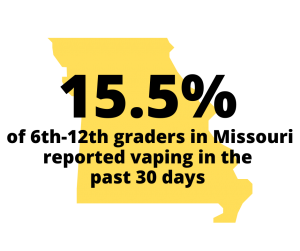 The Missouri state average for 6th to 12th graders vaping within the last 30 days was 15.5%, according to the 2020 Missouri Student Survey. Because of our parents’ commitment to learning and preventing youth vaping in our local area, reported last 30-day use of vapes among 6th to 12th graders in Clay County has declined from 11.1% in 2018 to 7.9% in 2020 (Missouri Student Survey).  But our work is still not done.  According to the same survey, more than 1 in 4 students also reported that it was “cool” for their peers to vape, and almost 1 in 3 students reported that vapes were “easy to get,” and more than 1 in 4 students reported that they don’t see “vaping” as harmful.

What are the Risks to Youth?

There are several risks to vaping for teens. Below are some major ones for parents to be concerned about: 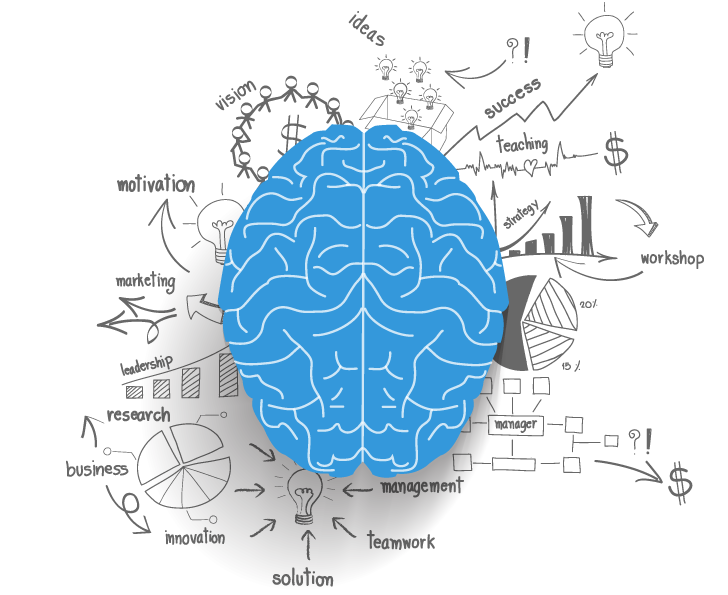 “The part of the brain that’s responsible for decision making and impulse control is not yet fully developed during adolescence. Young people are more likely to take risks with their health and safety, including use of nicotine and other drugs. Youth and young adults are also uniquely at risk for long-term, long-lasting effects of exposing their developing brains to nicotine. These risks include nicotine addiction, mood disorders, and permanent lowering of impulse control. Nicotine also changes the way synapses are formed, which can harm the parts of the brain that control attention and learning.”  – U.S. Surgeon General, Jerome Adams, M.D.

“How does the nicotine in e-cigarettes affect the brain?  Until about age 25, the brain is still growing. Each time a new memory is created or a new skill is learned, stronger connections – or synapses – are built between brain cells. Young people’s brains build synapses faster than adult brains. Because addiction is a form of learning, adolescents can get addicted more easily than adults. The nicotine in e-cigarettes and other tobacco products can also prime the adolescent brain for addiction to other drugs such as cocaine.”  – U.S. Surgeon General, Jerome Adams, M.D.

Vaping is Linked to Other Risky Behaviors

“E-cigarette use among youth and young adults is strongly linked to the use of other tobacco products, such as regular cigarettes, cigars, hookah, and smokeless tobacco.  Some evidence suggests that e-cigarette use is linked to alcohol use and other substance use, such as marijuana. And certain e-cigarette products can be used to deliver other drugs like marijuana.” – U.S. Surgeon General, Jerome Adams, M.D. 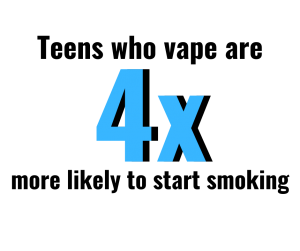 In a meta analysis of six studies, the findings concluded that the risk of smoking increases four times for teens that vape compared to their non-vaping peers. In another study of more than 2,000 10th graders, researchers found that one in five teens who reported a regular vaping habit at the start of the study smoked traditional cigarettes at least three times a month by the end of the study period. Another 12% of routine vapers smoked at least one day a month. By comparison, less than 1% of students who didn’t try vaping reported not smoking even one day a month at the end of the study.

Vapes are Being Marketed to Our Youth

With lots of flavors available for vaping liquids, as well as the variety of colors and discreetly-sized devices available that charge just like cell phones, it’s clear that vaping products are often marketed to teens. One of the slang terms for vaping, known as JUULing (“jeweling”), comes from the JUUL brand device that looks more like a flash drive than a vaping device.  Read more about JUUL’s early marketing tactics towards youth (Forbes, November 2018). 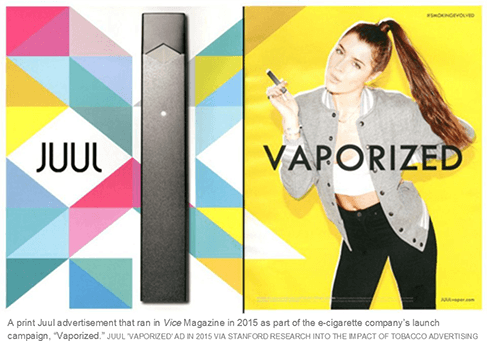 Vaping is also often sold as a “safer” alternative to cigarettes, and some teens are under the false assumption that just because vapes don’t contain tobacco they’re safe for teens to use.  In fact, many youth are under the false impression that they are just vaping flavored water, decreasing the perception that vaping is harmful.  With these low perceptions of harm, teens get hooked on vaping for many reasons, including trying to deal with stress, depression, and anxiety, or just because they’re bored or curious.2018).  The most recent vape of choice for teens has been the discreet and disposable Puff Bar.

What Can Parents Do?

In order to protect your child from vaping, Parent Up encourages parents to CARE, CONNECT, COMMUNICATE and pay CAREFUL ATTENTION.  While this strategy is no guarantee, if implemented consistently and with intention, the likelihood of your child engaging in any substance use is much lower.

Educate yourself and others about the harmful effects of teen vaping (and all drug use) on the developing brain and make it a priority to protect your child from engaging in any substance use.  Remember that you have the greatest influence over your child’s engagement in substance use. Start early and let your child know you care about their health and safety, and that you are speaking from a place of concern, love, and support.  These are tricky conversations and difficult situations to navigate with your kids, but a little work on the front end can protect your child’s health and safety for years to come.

Connection is key to prevention.  Kids that have stable, consistent, and healthy relationships with adults are more likely to make safer decisions and live healthier lives.  It’s important that parents, and other caring adults, take time to listen, pay attention, spend time, and follow up with the kids in their lives. When kids feel valued, they better understand their feelings and are more willing to listen to you. 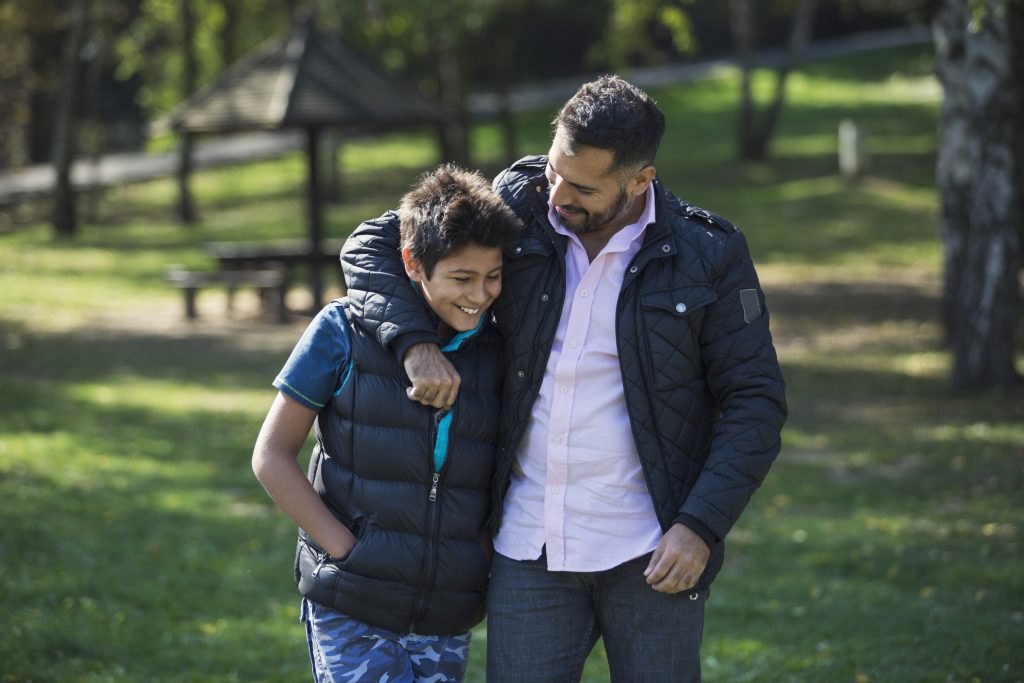 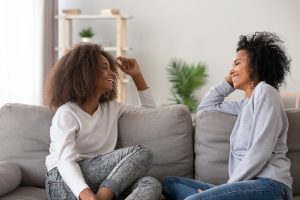 in and body, and setting clear expectations and rules is crucial to the Parent Up strategy.  Without these expectations, rules, and consequences, youth are much more likely to vape or try other drugs. Parent Up encourages you to start these conversations as early as age 8. Having open and honest conversations about this topic is important for preventing youth use.

Make it clear to your child that you don’t approve of them vaping, but be curious and open-minded about their experiences.  Ask them questions about what they think about it.  Ask them what they know or what they’ve heard about vaping.  It’s more important – and effective– to listen and discuss rather than to lecture.  Resist interrogating or threatening your child.  You are building a foundation for a relationship with your child that is honest, trusting, and open, which is an important protective factor to safeguard your child from all substance use.

As a general practice, know where your kids are at, who they are with, and be sure to check in when they get home.  Watch for any early signs or symptoms of vape or nicotine use and be on alert for changes in behaviors, friend groups, or attitudes.

Warning Signs that Your Child May Be Vaping:

If you think your child is vaping (as angry or frustrated as you feel), keep reminding yourself to speak and listen from a place of love, support and concern. Explain to them that young people who use nicotine or THC products in any form, including in vapes, are uniquely at risk for long-lasting effects. Because these substances affect the development of the brain’s reward system, continued use can lead to addiction (the likelihood of addiction increases considerably for those who start young), as well as other health problems.

You want your child to be as healthy as possible. Find out why vaping might be attractive to your child, and work with them to replace it with a healthier behavior.  Support your child on their cessation journey. There is cessation help available specifically for teens from the Truth Initiative’s This Is Quitting.  Teens can text “BREAKFREE” to 88709 for free tips and quitting advice.

Worried your child may be vaping?

The Partnership to End Addiction can help.